There is strength in numbers, this is a reality, if we are working for something, in this case for amphibian conservation we think working together can make a difference. In this occasion we have the visit of a group of enthusiast students from the Godalming College United Kingdom. They are visiting us for a couple of days, but not just that, but also in this period they are going to help us with the work we are doing with amphibian conservation. It really makes a difference to work together and all this work is going to the frogs, the frogs that are in need of help and this is the story of this teamwork for the conservation. 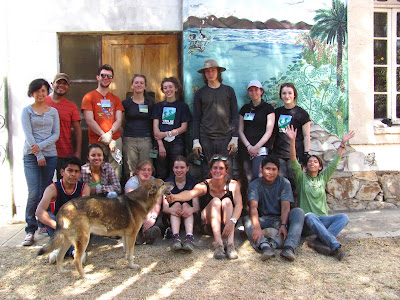 Following days we are going to post some updates of this work and we invite you to follow us.

Godalming College True Adventure Expedition Blog:
Day 1:
After a tiring night bus journey from Potosi to Cochabamba, the Godalming College True Adventure entourage arrived outside the Museo de Historia Natural Alcede’d Dorbigny excited for the challenging opportunities that lay ahead. After perusing the many fossils, tanks and habitats that exhibited the lives of a wealth of amphibian creatures in the public museum, we were greeted upstairs to our initial presentations on the conservation focus. Gabriel, Adriana, Sophia and Eliana introduced themselves as our key colleagues of the project offering fascinating insights into the endangered lives of frogs, particularly around Lake Titicaca. The expedition´s elected team leader, Issie, organised us into two groups and we experienced a tour of the public museum with further relevant information as well as the two containers occupying our amphibian friends, worm beds and the outdoor work areas.


We returned from lunch with Group 1 (Lucy, Abi, Rachael, Adam) beginning by sanding down de tablas in order to construct the foundations for the worm bed. These were then painted and sawed to measure. 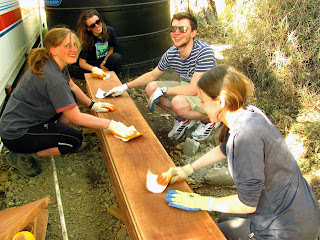 Group 2 (Charlie, Carys, Emma, Issie, Becki) split themselves into transferring the pre-compost from the work area, constructing an earth incline for the worm bed and by breaking down the chankaca into milk and sugar in order to create bacteria for the compost to feed the worms. 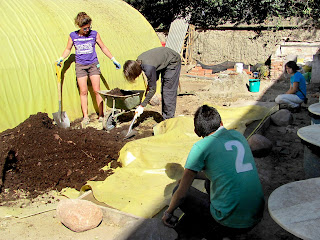 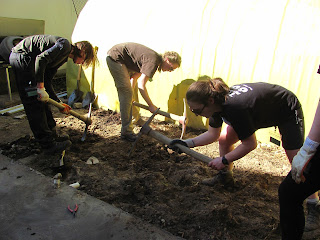 Even though we had only worked the afternoon, we all felt exhausted yet satisfied.