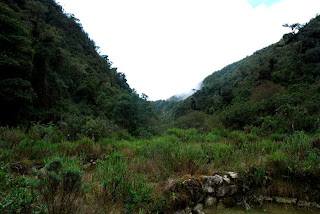 This time we went to the mountain cloud forest of Cochabamba department, one in the new road Cochabamba Santa Cruz and another near the ruins of Incallajta that once was one of the largest forts in Bolivia. we focused our work looking for aquatic species of the genus Telmatobius, unfortunately in both places we did not find any individual or tadpole; where previously the species Telmatobius yuracare, Telmatobius hintoni and Telmatobius espadai were very abundant, now there are no frogs... we just found individuals of other species that are not too associated to water like Gastrotheca, Pristimantis Psychrophynella and Hypsiboas. Some of them very abundant like Psychrophynella that was calling during almost all the day and everywhere.

It is very worrying that we are finding a pattern not just in those places also in other places we went like in Chuquisaca department and Potosi, were previous places with big populations of amphibians of the genus Telmatobius, but now those species are not anymore present. We also are finding some places like in the dry valleys of Cochabamba were T. hintoni was very common, now we are finding just some tadpoles and very few adults. This situation can be a temporal fluctuation but also can be a possible declining of these populations that in some cases the species are restricted just a small areas or even just some streams or rivers, and if those populations disappear, all the species is extinct. We sincerely hope that is just a fluctuation of the population size, but we are finding some indications that something else is happening and also with the chytrid fungus Batrachochytrium dendrobatidis (BD) recently reported in Bolivia, we think that we need to act now if we don't want to lose those species.

We also are working with captive breeding of some species that are common that we are using like model species and we are finding very interesting data and we were able to reproduce the species until tadpoles, now we are including our work to other species and at the moment we are learning lot things from that. Our plan is to start in a near future with other species that need the help and that are under a high risk to disappear, we hope that we will find some other solutions and work closely with the local communities like we are doing now to reduce the other threats, but unfortunately for now there is nothing we can do against the BD just to take out some individuals from the wild and to start ex-situ programs. We think it is very important to start to show the conservationists and the government the emergency to act now in the conservation of this group of vertebrates that more than one third of the species are threatened and under risk of disappear.