In search of Telmatobius in Chuquisaca II 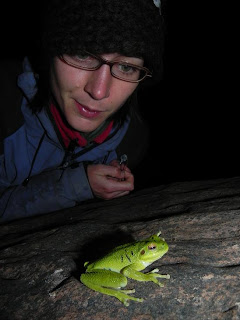 Trying to find more Telmatobius we went to the area of Cajamarca some kilometers northwest of Sucre, in this area we worked in some streams that was very interesting for Telmatobius.

The first day the first hours just Hypsiboas alboniger present and then… yes! We found the first night two individuals! This time one female and some minutes later a male. They were the same species probably but we need to work with these individuals, now we have some possible founders for our captive breeding projects of Telmatobius. 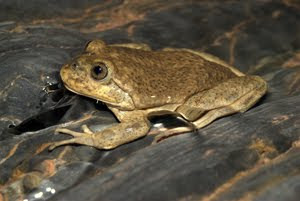 The following days were interesting also finding some frogs, another species too, like Hypsiboas alboniger and Pleurodema cinereum.

We measured some parameters of the water in the area and some information of the habitat that will allow us to monitor in the future and also took Chytrid samples of all the areas were we worked in this and the previous places. This will allow us to have one idea of how the amphibian populations are going and where the Chytrid fungus is present or not. 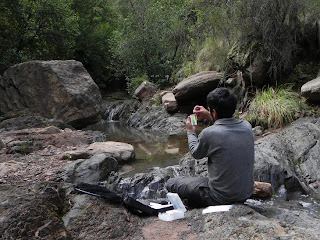 In search of Telmatobius in Chuquisaca I 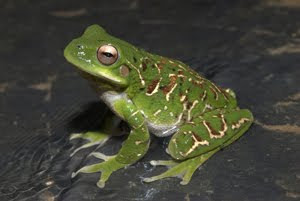 One of the objectives of our project is to find Telmatobius populations and to see how is going with those species. For this purpose we went to Chuquisaca in two areas. Icla located in the southeast of Sucre, the capital. We expended some days in the area looking for Telmatobius, for several days we just found the other common species and one near threatened species (Hypsiboas alboniger). Then just in the last days working in the area we found one big female of Telmatobius with the very yellow belly, Telmatobius simonsi, one species that we were looking for several years finally we found it. But unfortunately we found just one individual in all the time we were over there. 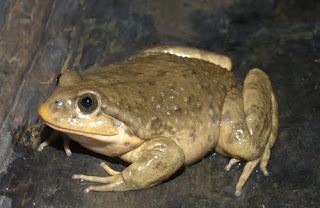 In this place we found a kid that told us that normally he see all the time some frogs in the river and with the description we can say that they are Telmatobius. The kid helped us to look for the frogs, unfortunatelly we could not find any frogs, but was interesting the data that the kid gave us about the area and the frogs. 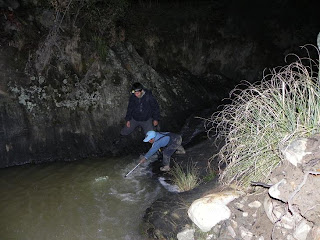 There is a hope to find more individuals in the future going back to the place. In our return to Sucre we found some children hunting something in the water, we stopped and yes, they were hunting with rocks some frogs and we already found some dead and destroyed frogs, we ask them why were they hunting and they just told us, just for fun… so we took out our equipment and told them if they wanted to help us to study the frogs and we started to measure the water quality, take samples of the skin, taking coordinates and explain them all about amphibians, diversity, how useful are they and why are they important in the area. When we were talking with them they were watching the frogs in different way and also helping us to take samples. We also told them that we are working in all Bolivia with the frogs and they were interested in this different new information about amphibians, previously just a slamy thing that they used to hunt, we don’t know how was the impact of that talk but after we left the kids were talking around the pond and not hunting anymore. 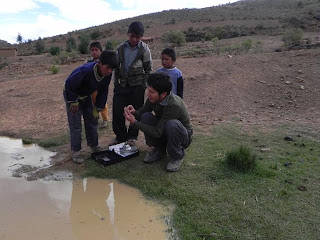