The day kicked off with Emma and abi finishing off yesterdays sanding of the door and replenishing the paint on the Wood. This was done efficiently amd precisely, with only a little discomfort accompanying the fact that they were instrructed to clean their hands with 100% gasoline. 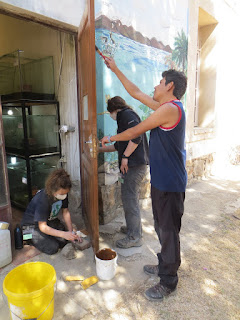 Meanwhile, Adam, Becki and Rachael were directed towards a tiny room which needed to be thouroughly cleaned out and fixed up. After a somewhat interesting encounter with a pile of  plaster dust, several bags of rubbish and a lot of spiders, it was discovered that there was toilet in the back of the room. So naturally, they took a hammer to it. Once the toilet had been removed and the pipe yanked from its resting place it was soon realised that whilst taking out the loo they had also taken out several chunks of the Wall/ceiling. This led to the next job. Cementing the holes in the Wall and filling the cracks. This kept Adam and becki busy for the rest of the afternoon, with only a litle bit of misdirect(ed cement falling on becki. 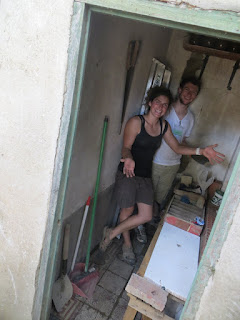 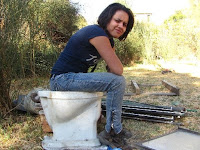 
Lucy, Carys, Izzy and Charlie spent their day with the important but seemingly easy task of removing the frogs from their tank and renewing some of the decorations. Moving the tank itself was hard enough, this however was rendered easy by comparison when it took six people more than six hours to catch just  three frogs. This being due to the massive tunnel that had formed between the front and back sides of the tank. Therefore much cajoling involving flashlights from phones and gloved hands was used in order to get the frogs into an accesible place. Superficial repairs to the tank´s paint was attempted but due to the oliaginousness of one frog, nothing revolutionary could be done. We decided to call the last frog standing ´stubborn´, for our unwillingness to admit that his intelligence outranked ours. 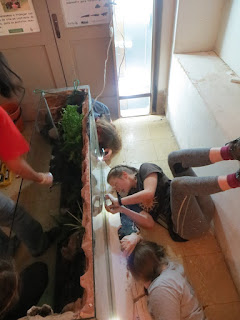 In the latter part of the day, after a well deserved lunch, the antics continued. A school presentation halted the progress of the frog hunt, but many more tasks were on offer. Rachael, Lucy and Abi took to painting the worm beds constructed yesterday, whilst Charlie, Izzy and Carys filled the beds with precompost. Upon finishing the job they moved to fill a hole surrounding a water tank.

Whilst writing this very post, shouts of elation could be heard from downstairs. Immediately we knew that ´Stubborn´ the frog had finally, after nearly nine hours, been captured. We ran as quickly as posible to get a photo, and the day ended on a high 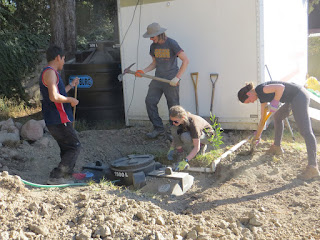 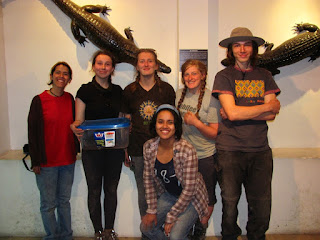