Day 2:
After a solid night´s sleep, we were eager and determined to complete the day´s tasks ahead. Adam and Becki, the college and True Adventure team leaders, swapped groups in order to keep abreast of the valuable contributions being made by all members. Group 1 were tasked with deconstructing a small, dilapidated outbuilding with the mission of creating a compost store by the end of the day. Becki and co thoroughly enjoyed demolishing the interior wall and decluttering the several bags, bricks and rubble that lay on the ground. 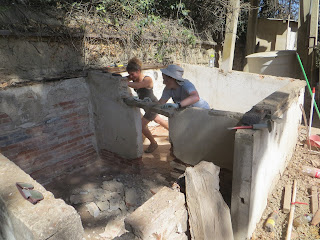 Group 1´s success is borne out through their tidy and washed outhouse floor with Becki and Carys trying their hand at brickmaking. Here is a before and after shot of the building. 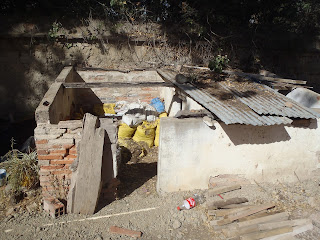 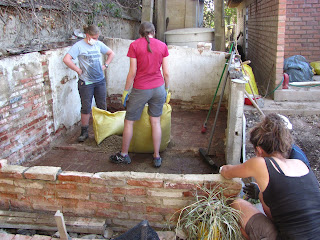 The pre-compost was then transferred into its new fashionable outhouse with an army of Group 1 troops running to collect water from the tap to pour over the pre-compost. The pre-compost comprises non-descript manure, dry leaves, saw dust and copious amounts of water mixed together to create a dusty mulch.
Group 2 were instructed to create de tablas by nailing bars to fasten them together, further sanding of wood, finalizing chancaka breakdown and creating and pouring cement on the incline structure for the worm bed. 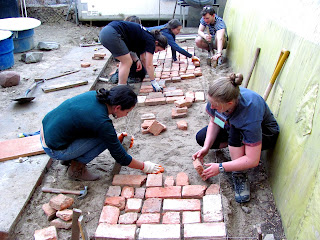 The group`s split but concerted efforts were highly productive. In the afternoon capitalising on a morning of construction, Adam and Charlie created and poured the cement ready for application 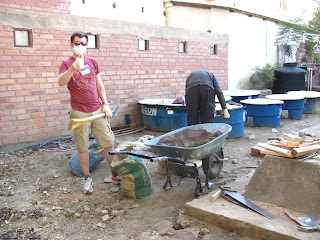 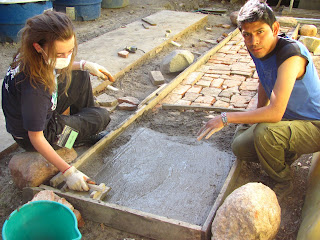 After a morning of sanding down wood for de tablas, Issie and Emma painstakingly reduced down the chancaka into bacteria food for our wonderful worms. 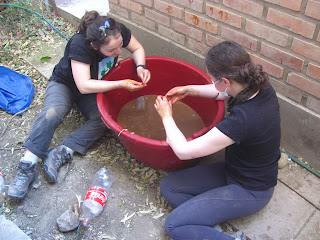 If we felt satisfied by the end of Day 1, we were feeling very proud of our efforts by the end of Day 2 with both groups continuing until ten past six. We look forward to a very messy trip to the supermarkets for our evening of decadence.
Publicado por Arturo en 8:27