more news from our offspring

After a couple of days that we had the first eggs of Telmatobius culeus, now we have tadpoles. It was not so easy; everything was very nice and good until the day 6 and 7 when almost all our embryos were very well developed but we don’t know why?, but several of the tiny tadpoles that were inside of the eggs could not go out, in some cases we saw that some individuals were trying to go out but it was not successful and in other cases other small tadpoles were able to go out but they died. We are still searching the possible reasons for this, but fortunately we already have free swimming tadpoles that are doing well and they are already growing up very fast.

It is a great opportunity to learn more about this species and also to get more information that can be useful for the future not just for us but also for other institutions that want to work with this species.
It seems that the good news are coming  together because a couple of days before we had another species of Telmatobius having eggs, this time from the south of Bolivia that probably is a new species for Bolivia or to science. Now we have also some tadpoles from this new species and with this we increase at four the species that we are able to breed in our captive breeding facilities.


These events are giving us a lot of information and also hope for these species and also if we are able to find some species that we are not finding anymore, we think we are going to be able to give them a chance to exist in this world.
Publicado por Arturo en 11:01 No hay comentarios:

Now coming back with some good news, this time from our captive breeding component; after some success breeding different species of Telmatobius we decided to try to breed our individuals of the critically endangered Titicaca water frog (Telmatobius culeus). After some time learning how to keep them, working with the water quality of their aquariums that are very special due the water of the lake and also after treat the frogs for Chytrid, we decided to put together our male frogs with the females.

Was very interesting to see how they reacted and to see that they were more than ready to try to breed, the first couple of days we saw different amplexus where males hold females to try to breed.


About one week later we had some news, eggs in the aquarium! First time we try and we did it! Now to see if the eggs were ok, but just a couple of days waiting and with our first photos we found that they were developing… we saw that they took more time that our other species but they were doing well, now after some days, they are already leaving their eggs and finally we have our first tadpoles of the critically endangered Titicaca water frog.

This is a hope for us, telling us that the different species that are under a high risk to disappear can have an opportunity, we just need to work together.

Is Chytrid in these localities?

The second part of fieldwork in Bolivia was very interesting, we found some new populations of the threatened amphibians of the genus Telmatobius, also we visited other localities that we use to monitor some populations.

We found a big change in water quality between different seasons of some streams that seem to change in the dry season and in the wet season.
In one of the localities we did not find adult frogs, just two tadpoles but also for our surprise we found two dead juvenile frogs of Telmatobius simonsi in the same stream and not so far one from each other. It was strange to see this in this stream were before we never found dead frogs. We collected all the samples and we want to analyze those samples to know what it is really happening in this area, because if Chytrid did arrive to this area, we would need to do something urgently.

We really hope that these populations that are present in dry and high areas that seem to be ok will not have the same pattern of declination like species from mountain cloud forests that are not anymore present.

in search of the frogs


Time to go out to the field and to see how the amphibian populations are going, this time we are crossing almost all the country visiting the different sites in five departments of Bolivia, Cochabamba, Oruro, Potosi, Chuquisaca and La Paz. We are trying to find the different populations, to obtain samples of water quality, chytrid swabs, UV readings and to try to find some extra populations mainly of threatened amphibian species of the genus Telmatobius.

For this we are visiting to de different sites with our team searching frogs in different sites, but unfortunately several places were before were very common or it was a record of some species, we are not finding frogs anymore, this is the case of Telmatobius yuracare, one species that before was very common, but not anymore. Now several streams are empty, no more frogs, we try to think what the reason is and a lot of new questions come out.

In one of the sites, we had again the comment of the local people telling us that the amphibians went to the war, like we heard before in other are some time ago http://bolivianamphibianinitiative.blogspot.be/2011/04/did-chytrid-fungus-arrived-here.html when they told us that the frogs went to the war and since then they died a lot of frogs and that they found a lot of dead frogs in the streams… probably this situation is related with the arrival of chytrid to the area and it is interesting to see what was the reason and when exactly. Another common thing in these sites was the presence of an exotic species; the trout that now is present in all these streams and probably also has an effect in the Andean amphibian populations like had in other areas.

After several places with no frogs we moved to other areas and it was less frustrating to be able to see our frogs doing it well, some adults, tadpoles in different stages and relatively common, this is giving us a hope, but also telling us that we still having the change to try to understand what is really happening with amphibian populations that are decreasing and this is what we are trying to do. Now we still having some other places to visit and we hope we are going to find more frogs, frogs that tell us how our environment is going.

Working together helps to understand and to be able to work for the conservation of biodiversity with fastest and better results. For this reason we are trying to get in contact, to coordinate and to work together with other researchers, institutions and conservationists. 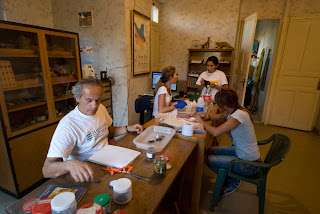 This is the case of Dr. De la Riva (Spain) and Dr. Burrows (Puerto Rico) that at the moment are in Bolivia working with a project with Chytrid and because we already are working with this subject with other institutions we are trying to coordinate and support for the understanding of this disease. They visited our facilities and also took some samples for the future analysis and to test some hypothesis about this disease.
Another case is Dr. Denoel from Belgium visiting the project with the different localities where we are working and exploring different options to work together especially with ecology, exotic species and the impact in amphibian populations. 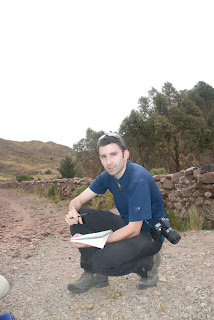 With this visit we possible will start collaboration between both institutions
These are some examples of the contacts that we are developing and that we think are going to help our work for the conservation of our biodiversity. For this we always welcome people or institutions that want to help us to work and that want to work together for the conservation of Bolivian amphibians.
Publicado por Arturo en 3:23 No hay comentarios: