Trip of our volunteers to the field

Elana, one of our volunteers working in the project has been working with us helping us a lot with the captive breeding component, improving the work we are carrying out and also helping us with the frogs, and now here she wants to share some of her experiences in one trip she carried out to Titicaca Lake, we hope you enjoy it. 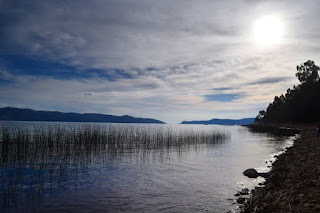 Gabriel, Ricardo, and I headed to Lake Titicaca for about a week to go to different localities on the lake, in both the larger and smaller portions of it, to look for frogs and check the different conditions in those areas. After a more than a 12-hour journey from Cochabamba of various buses, boats, and taxis, we finally arrived on the tiny island of Isla de la Luna which is located in the larger portion of the lake. This portion of our trip we were also joined with four other people who helped with our research. 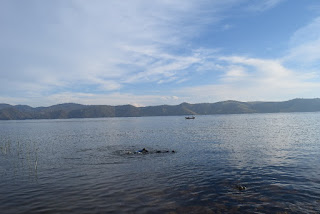 After getting settled, at around 3 pm we set out to the lake to look for frogs. In the span of three hours and around 600 meters, we found 75 frogs of all different sizes, including one dead, one swollen, and two in amplexus. Every 10 meters we would measure the depth, visibility, habitat, and time. We would count how many frogs we found within 10 meters, and with a frog found we remarked the substrata, what the frog was doing when found, details about the frog such as sex and size, and the distance from the person who found it. Here and afterwards at every locality we visited to look for frogs, we took samples of the water to later do tests of water quality . 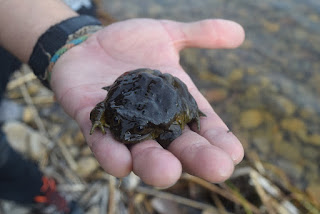 We set out the next morning to the same spot but spent our time in the water picking up traps we had left behind during the initiative’s last trip to Lake Titicaca and set out new ones. From the traps, we examined the invertebrates living in the water that are sources of food for the frogs. After lunch, we left the island and headed to Copacabana. 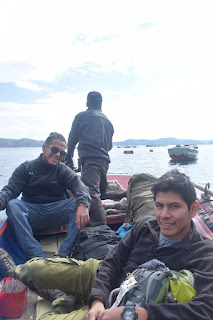 After getting off the boat that took us from Isla de la Luna to the mainland, we had a long trek uphill to our taxi with all our stuff, including wetsuits, since there were no roads in the village. The walk was worth it since the views were beautiful. 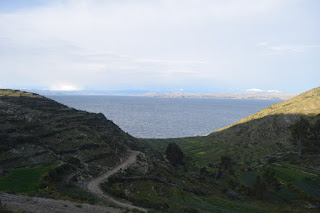 The next day from Copacabana, with just the three of us, we took a taxi to a variety of spots on the larger portion of the lake to look for frogs. At each locality we visited, we would swim 700 meters to 1 km looking for frogs. At every 100 meters we would measure the depth, visibility, habitat, and the time. Every time we located a frog, we would note the time, depth, and size and sex of frog found. We had less luck here and found only about 7 frogs. 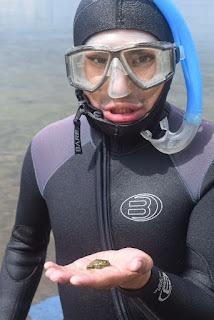 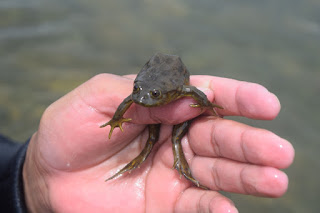 In the evening, we also went to a pond in a close vicinity to the lake to look for frogs, with no luck. We found tadpoles in vernal pools by the pond, but we are unsure the exact species of the tadpoles. 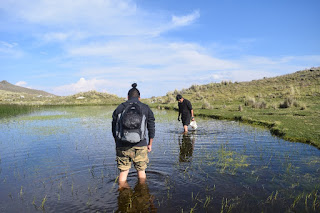 After Copacabana, we headed to Huatajata for a night. We spent that afternoon and the following day visiting about 8 localities in total looking for frogs; this was all in the smaller portion of the lake. We weren’t so lucky here either and found fewer than 5 frogs. 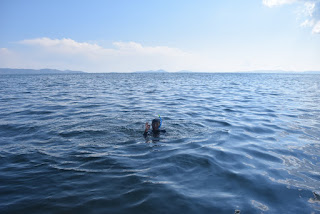 For our last day, after staying in La Paz for the night, we took a bus to Taraco and went to two different localities to look for frogs, with no luck finding any. 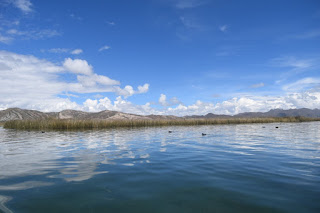 After a beautiful but cold trip, it was nice to return back to sunny Cochabamba, even if it was at 5 am only to then get back to work by 9 am at the museum where the captive breeding facilities of this species is.
Publicado por Arturo en 4:15 No hay comentarios: