After a day of resting and exploring Cochabamba,  the eager Godalming College team set out for another dedicated day of hard work. With transport changes due to protests splitting the group into 2 units, Adam, Lucy, Rachael and Carys arrived on the scene first and began work on the fish tank. Adam started with cutting polystyrene which was crucial to the maintenance of the tank. Lucy and Rachael both set off in search for worms for feeding the frogs. Carys embarked upon a mission of stone cutting for the improved frog tank, and moved on to cleaning out the cockroaches with fresh fruit and vegetables with Sophia. Soon after Izzy, Emma, Charlie, Abi and Becki arrived and started work on collecting woodlice for feeding the frogs along with the worms.  After catching hundreds they moved into the lab and container 1 and 2 to feed all the frogs. Emma fed all the frogs in the lab with woodlice and enjoyed the task despite frustrating location attempts. Becki and Sophia moved into container 2 and fed the frogs, woodlice and worms while Charlie and Abi explored th tanks serving the frogs worms and woodlice 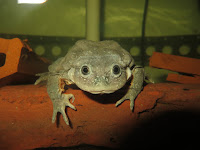 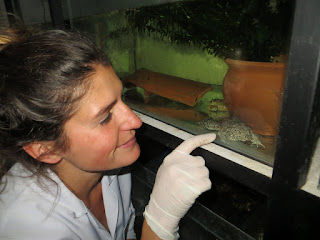 After lunch, Sophia gave her first English presentation of frogs and the importance of water quality. This gave the team an insight into the process of protecting endangered frogs. After this presentation, an unwell Abi was sent to the hostel to rest along with Becki and the remaining team split into two for the following tasks. Charlie, Emma, Izzy and Rachael began work on water quality and checking the alkalinity, nitrite, ammonium, phosphate, hardness and PH of various water types. 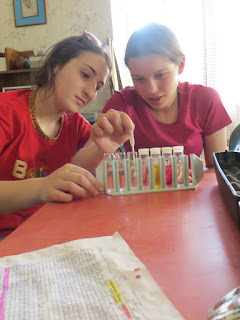 Meanwhile, Lucy, Carys and Adam accepted the task of detailing and creating an inventory for all the preserved species for scientific studying purposes. This gave the group the opportunity to explore and learn about various species of frogs, lizards and snakes. After investigating 56 various species, the group swapped over with other half of the team and managed to widen their knowledge on water usage in ecosystems.