big frogs in the lake 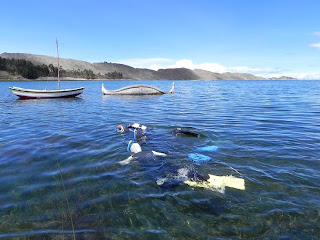 One of the species which we are working with is Titicaca water frog, this time we went with our team, Ugo a young student that is going to study biology and want to learn the work that one biologist do normally, together with Ineke, Rodrigo and our friend from the local community Nelson and his father Hilario. 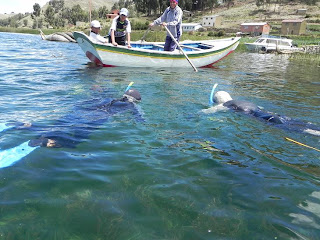 We did our transects diving and with snorkel in the area were normally do and found some dead individuals that we collected, also some small and medium size individuals.

Next day we had a meeting with the new authorities about our work and some ideas for the future and they invited me for the community meeting the next days. This opportunity will allow us to work better with them. 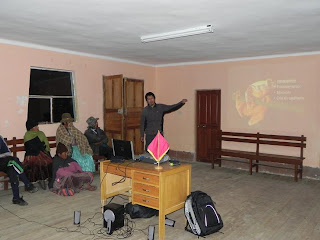 The meeting with the local community

Then with our motor boat we went to one place that we did not check before, first we did not find too much and then a big frog! Then we started to see several frogs, all of them big!! . Later we also found individuals in amplexus it was a nice opportunity to dive and to take pictures and film this couple. Minutes later we spotted a huge frog in the bottom the lake about 5 meters of depth again an opportunity to dive and this was the biggest frog we saw in this 3 years. 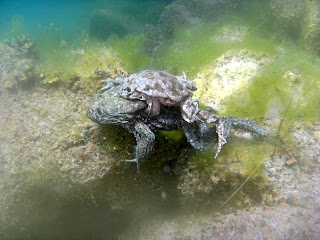 A couple of frogs in amplexus

Then in the meeting with the local community after a short presentation they told us that they were interested to work with us and also they want to try to find some way to protect the species, probably with ecotourism, or other activities that will not affect the species and the habitat. 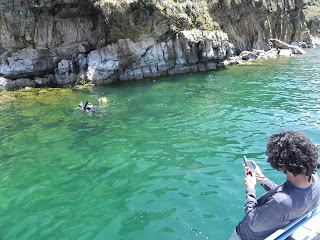 recording the coordinates were we find the frogs

We also saw the Jack Cousteau documentary he filmed in 1973 and the work with the frogs, showing the very interesting findings and estimating the size of the population. It was very interesting to see how the people from the community were very excited about the film because they recognized areas and people.

After this trip we realized that there are some areas that still with big frogs and also in good conditions and we hope that we can work in the conservation of these populations and work together with local communities.